BELLATOR MMA 255: Pitbull vs. Sanchez 2 Will Be Available on Pluto TV, Hulu, FuboTV, YouTube and More 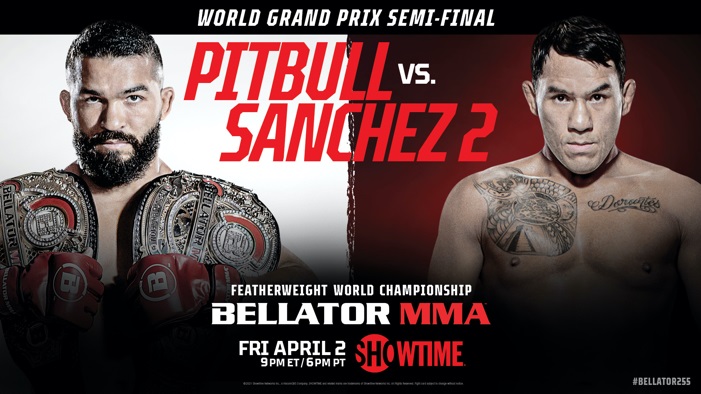 The main card, in addition to airing live on SHOWTIME for subscribers, will be available for free to millions across the United States on industry-leading streaming services Pluto TV, Hulu, YouTube and FuboTV, in addition to participating television providers Armstrong, Buckeye, Liberty, Optimum and Suddenlink without the need for a SHOWTIME subscription. The main card of BELLATOR MMA 255: Pitbull vs. Sanchez 2 features five high-stakes matchups and is headlined by the next round of the Featherweight World Grand Prix tournament, as BELLATOR’s reigning lightweight and featherweight champion Patricio “Pitbull” Freire (31-4) defends his 145-pound title against Emmanuel Sanchez (20-4) in a semifinal bout.

The full 13-fight event, including eight preliminary fights, will live stream on the SHOWTIME Sports and the BELLATOR MMA YouTube channels, in addition to SHOWTIME’s official website (www.sho.com). The full event, which begins at 6 p.m. ET/3 p.m. PT, also will stream live on the SHOWTIME Selects and BELLATOR MMA channels on Pluto TV.

“We are proud to be the new home of BELLATOR and delighted to share this debut event with millions of non-subscribers,” said Stephen Espinoza, President, SHOWTIME Sports and Event Programming. “BELLATOR has steadily built the strongest roster in its history and now includes some of the best pound-for-pound fighters in the sport. On Friday night, we will introduce new fans to this premier brand of mixed martial arts and invite them to our network, which along with world-class championship boxing now boasts more than 40 live combat sports events per year. SHOWTIME Sports premium fight coverage and signature storytelling sets the standard in combat sports and, coupled with our leading entertainment content, the value of the SHOWTIME subscription is now unrivaled for combat sports fans.”

As part of the launch of BELLATOR MMA on SHOWTIME, the network is offering viewers who are new to the SHOWTIME streaming service a 30-day free trial, followed by a discounted monthly subscription fee of $4.99/month for the next six months. Viewers can sign up at SHO.com/BellatorMMA. Subscribers will be delivered two premier BELLATOR MMA events per month throughout 2021 and beyond, with all events scheduled to air live at 9 p.m. ET/6 p.m. PT anywhere the SHOWTIME service is available.

In the main event on Friday, April 2, “Pitbull” and Sanchez are vying for a chance to move on in the single-elimination Featherweight World Grand Prix tournament to face undefeated AJ McKee (17-0), who has already punched his ticket to the finals with an impressive first-round submission win in November. Fans can expect fireworks as these men compete for the BELLATOR Featherweight World Title and the World Grand Prix $1 million prize.

The launch of BELLATOR MMA on SHOWTIME marks the beginning of three consecutive weeks of action-packed fights. Following the Featherweight World Grand Prix Semifinals on Friday, April 2, BELLATOR will begin the Light Heavyweight World Grand Prix, featuring eight of the top fighters in the deepest 205-pound division in the sport, with quarterfinal fights on both Friday, April 9 and Friday, April 16. On Friday, May 7, BELLATOR 258 will be headlined by Juan “The Spaniard” Archuleta (25-2) against Sergio “S.P.” Pettis (20-5) for the BELLATOR Bantamweight World Championship with the co-main event featuring Anthony “Rumble” Johnson (22-6) and Yoel “Soldier of God” Romero (13-5). Both Johnson and Romero will be making their BELLATOR MMA debut in this highly anticipated light heavyweight quarterfinal fight.

BELLATOR MMA is a leading global mixed martial arts and kickboxing organization featuring many of the best fighters in the world. Under the direction of veteran fight promoter Scott Coker, BELLATOR events take place in major cities worldwide and can be seen on television in over 160 countries to an available audience of over one billion people. In the United States, BELLATOR can be seen on SHOWTIME. BELLATOR is comprised of an executive team that includes top industry professionals in television production, live event orchestration, fighter development/relations, venue procurement, sponsorship creation/development, international licensing, marketing, advertising, publicity and commission relations. BELLATOR is based in Hollywood, Calif. and owned by entertainment giant ViacomCBS, home to the world's premier entertainment brands that connect with audiences through compelling content across television, motion picture, online and mobile platforms.