Will Premiere on Sunday, July 4 at 9 PM ET/PT 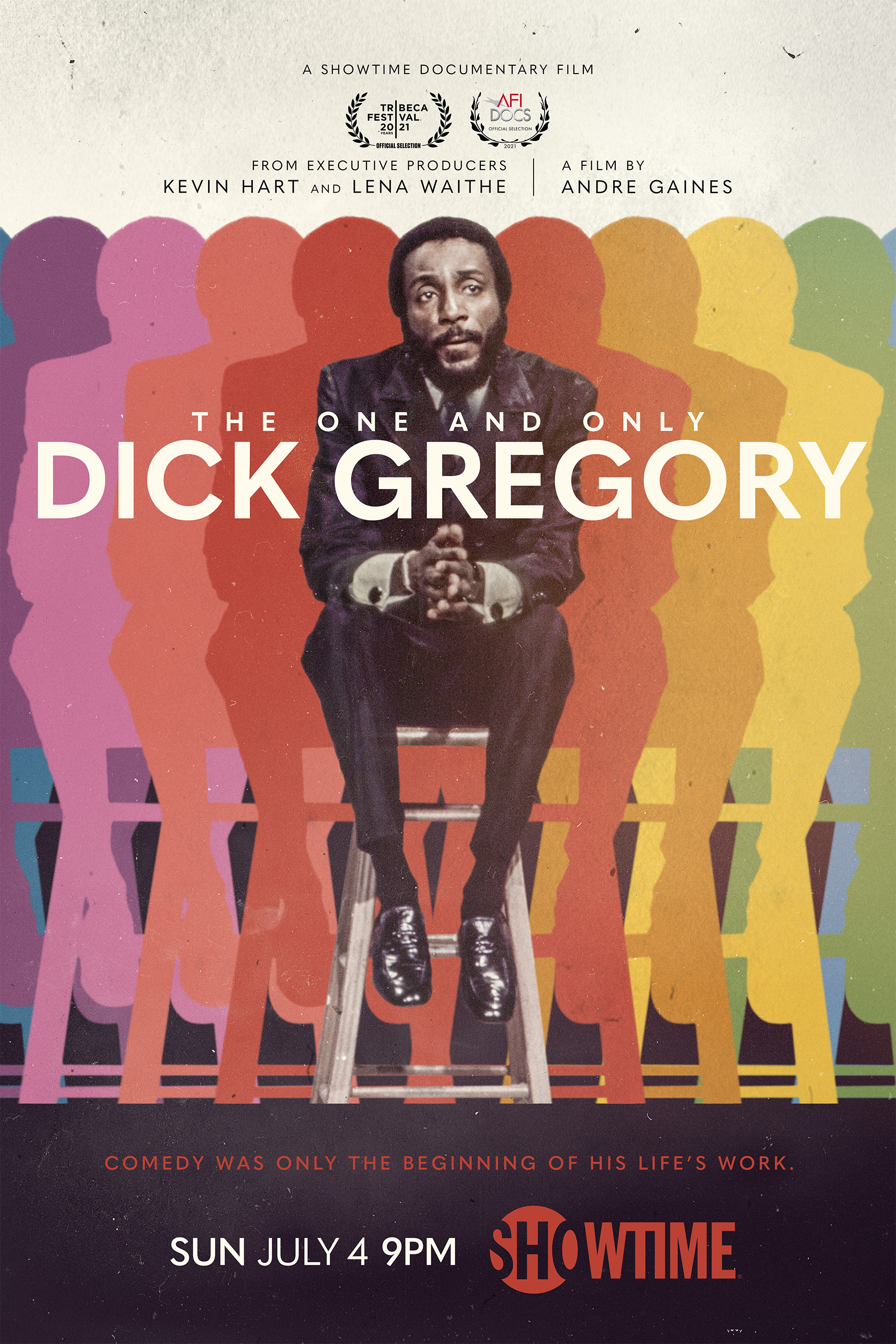 LOS ANGELES – June 9, 2021 – SHOWTIME Documentary Films today announced that it has acquired worldwide rights to THE ONE AND ONLY DICK GREGORY, the directorial debut from producer Andre Gaines (The Lady and The Dale, Bill Nye: Science Guy). The documentary feature unpacks the career of Dick Gregory, the activist, pop-culture icon and thought leader who changed the lives of millions across the world through constant disruption and awareness. The film will have a World Premiere at the Tribeca Film Festival on Saturday, June 19 as part of the festival’s inaugural Juneteenth programming slate, ahead of the SHOWTIME premiere on Sunday, July 4 at 9 p.m. ET/PT.  The announcement was made by Vinnie Malhotra, Executive Vice President, Nonfiction Programming, Showtime Networks Inc.

To watch and share the first look clip, visit: https://youtu.be/QZjZ1VbhgvM.

“There is no more important time than now to revisit the life of Dick Gregory,” said Malhotra. “His fearless voice rose to the challenges of his time, calling upon Americans to question their beliefs, in an era where you risked your livelihood – maybe even your life – to speak out. Though a comedic genius of his generation, comedy turned out just to be the beginning of one of the most unique and impactful journeys of any person we’ve seen. Andre and team have done a remarkable job in showing just how Gregory walked the walk and talked the talk in a way we have rarely seen anyone else do.”

Gregory inspired a generation through on-the-ground activism, an untiring desire to help and his influential comedy. Featuring archival footage of his early career as a comedian, the film is bookended with Gregory’s own voice just before his death in 2017, reflecting on the impact of his life on the world as a self-described “agitator.” Dave Chappelle, Chris Rock, Kevin Hart, Wanda Sykes, W. Kamau Bell and others discuss Gregory’s paradigm-shifting significance on the art of comedy and culture. The film features original music by Black Thought of the Grammy® award winning hip-hop band The Roots.

“Dick Gregory is as present to me now as he was when I first started filming him six years ago – a trivial length of time when compared to the nearly six decades that this one man so greatly influenced American history, comedy, activism, and nutrition,” said Gaines. “He emptied himself completely for the movement, and while the enormity of his sacrifices are rarely acknowledged, he gave every artist a master class for what it truly means to both entertain and educate. Knowing Dick Gregory was a transformative experience that not only influenced the making of this film, but me as a man. Vinnie and the team at SHOWTIME have been incredible partners to help bring this timely story to the world, and I cannot wait for Dick Gregory to finally get his due.”

Gaines founded and runs Cinemation Studios which is based in Los Angeles. His producing credits include the four-part documentary series, The Lady and the Dale, the remake of Stephen King’s Children of the Corn, Spike Lee’s Da Sweet Blood of Jesus, and the award-winning film Bill Nye: Science Guy.

THE ONE AND ONLY DICK GREGORY is a Cinemation Studios production, written and directed by Gaines, and produced by Gaines and Valerie Edwards. The film is executive produced by Kevin Hart and Bryan Smiley for Hartbeat Productions, Lena Waithe and Rishi Rajani for Hillman Grad Productions, and Christian Gregory, Chad Troutwine and Matt Rachamkin.